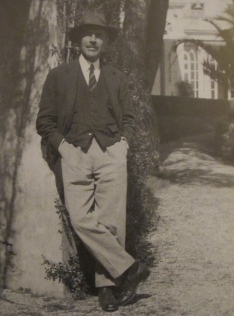 Reginald Radcliffe Cory on the French Riviera, 1933.  Cory’s generous bequest to the Botanic Garden enabled the development of the eastern section from the 1950s.

The beginning of a research project is a particularly exciting time. There is the delicious element of the unexpected, not knowing what you may discover, which paths will appear or unknown connections may emerge from your explorations and questions.

Since my project focuses on the social history of the eastern section of the Cambridge University Botanic Garden through time, understanding the timeline of people and developments seems a useful navigational point to begin.  While historic people, decisions and events have influenced the development of the contemporary eastern garden, it was only after the second world-war that work began on this half of the garden, following a generous bequest from Reginald Radcliffe Cory (Trinity College).  Cory is a key figure in enabling the development of the eastern garden, therefore Cory’s story is an important one.  It dates back at least to the 1920s and his relationship with the first academic director of the botanic garden, Humphrey Gilbert-Carter.

The main emphasis of my project will be on key people and developments from the 1950s.  For example, since 1951 there have been six directors and acting directors – John Gilmour, Max Walters, Donald Pigott, Thomas ap Rees, John Parker and the current acting director and curator, Tim Upson.  The newly-appointed director, Beverley Glover, takes up her post in July 2013.  Each director has overseen a range of developments in the garden;  each has been influenced by prevailing ideas about the environment, biology and horticulture.

A serendipitous opportunity to attend a SHARE Museums East training day at the Cambridgeshire Archives (Shire Hall) and the Cambridgeshire Collection (Central Library) offers some additional fascinating resources to explore.  It is hoped that information from these local archives will add further colour and texture to the botanic garden history.