Fellow of Wolfson College. Fellow of the Linnaean Society of London.

Dr Peter Yeo joined the Botanic Garden in 1953 as Research Assistant.  During Dr Yeo’s 40 years at the Garden he worked as Botanist, Taxonomist and Librarian, as well as teaching at the Botany School at Cambridge University.  During his extensive career he co-authored many books, as well as articles, on a wide range of topics, including botany and natural history.  His painstaking working on the hardy Geranium species led to the Botanic Garden being awarded National Collection Scientific Status in 1999.  His monograph on Hardy Geraniums, or cranesbills, was published in 1985 and remains a classic publication on cultivation of this extensive species.   See Google Books  Hardy Geraniums
In 1981, Peter Yeo and Clive J King, Librarian, published a Catalogue of Plants in the Cambridge University Botanic Garden. 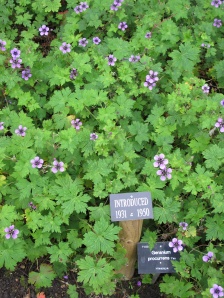 Several hybrids of the Geranium family have been named by Dr Yeo. These include Geranium x cantabrigiense (a hybrid of G. macrorrhizum and G. dalmaticum).  Read more about Geranium.

In addition, there have been several species named after Peter Yeo, including Geranium x magnificum ‘Peter Yeo’. (Right) This Himalayan species collected in Kashmir by Dr Raina on behalf of Peter Yeo was named after his wife Elizabeth.  Geranium pratense ssp.stewartianum ‘Elizabeth Yeo’.

Interests  Peter Yeo was an expert on insects and birds in addition to his knowledge of plants.  He published a Naturalist Handbook on Solitary Wasps together with Sarah Corbet in 1985.