Grand plans and designs for the Botanic Garden were drawn up although these were never built. Had they been realised, the Cambridge University Botanic Garden we encounter today would look very different.

These drawings show a selection of ideas created for grand public buildings and decorative features in the Garden.  They were drawn up for the Botanic Garden by the architect, A E Richardson, RA, in 1944.  Plans include a concert hall with band stand, garden seating and shelters, as well as grand formal entrance walls and terminations. 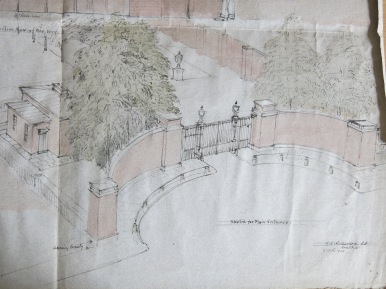 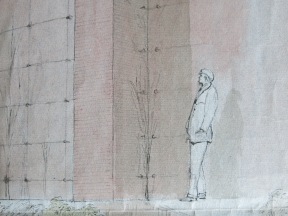 New wall
One ambition that was realised was the moving of the ornate cast-iron gates from the original city-centre Physic Garden which were moved to Trumpington Road in 1909, to create a dramatic entrance onto the Main Walk.  These fine gates are no longer used as a main entrance to the Botanic Garden.  Nevertheless they are a prominent reminder of the links between the Garden’s historic beginnings as a small 18th-century Garden and the new 19th-century Botanic Garden south of the city centre.  This ‘new’ western Garden created by Henslow and Murray, was transformed through the opening up of the eastern extension in the 20th century.  These two halves of the ‘new’ Botanic Garden create the dynamic modern 21st-century Botanic Garden we see today.

Trumpington Road
What is a Botanic Garden? The Changing Role of the Garden, The Laboratory and the Garden, Technology in the Garden.
Loading Comments...
Comment
×