What is Plant Conservation?

Why Conserve Plants?
Humans and animals are dependent on plants for their survival.  Plants provide the food that we eat, our animal feed, the clothes we wear as well as the active ingredients for our medicines. In addition, living plants are essential to the healthy functioning of our biosphere – the living world which humans inhabit.  Plants synthesize oxygen and carbon dioxide from the atmosphere.

Why is it important?
As well as providing food to eat, plants provide materials for our housing – wood, thatch, straw, wicker etc.  They provide materials that are essential to our lifestyle – rubber, paper, oils, wine, dyes and pigments.  Many modern pharmaceuticals are based on chemicals that are derived from plants.  In the developing world 80% of people rely on herbs, barks, fruits and roots of plants for their natural medicines.  Increasingly science is looking to biofuels as a future replacement to fossil fuels, such as oil, coal and gas.

Sara Oldfield, Secretary General, Botanic Gardens Conservation International (BGCI):  “I think we tend to take plants for granted, particularly in a country which is generally green and where we are not so directly involved in growing our own food any more.  I think we are losing that connection with nature… I don’t think we fully understand what we are losing or what the implications will be….  Ten years ago we estimated that 10% of all world tree species were threatened with extinction.”

The Botanic Gardens Conservation International (BGCI) is ‘an international organization that exists to ensure the worldwide conservation of threatened plants, the continued existence of which are intrinsically linked to global issues including poverty, human well-being and climate change’.  The organisation works with over 700 Botanic Gardens around the world in 118 countries to support members and the wider conservation community.  One third of all our plants are threatened with extinction. It is the task of the BGCI to work together to support plant diversity for the well-being of people and the plant.  The BGCI is based in London with offices in Kenya, USA, Singapore and China. The BGCI website offers a resource centre and education centre as well as Climate Change information centre.

Plant Conservation in the Garden
The collection of living plants in the Cambridge University Botanic Garden contains many rare and endangered species.  Concerns over the rapid destruction of the tropical rain forests across the globe have been the topic of concerns by environmentalist and climate change scientists for many years.

Wildflowers  Closer to home, local Cambridgeshire botanists had been expressing concerns about the loss of local plant varieties from the 1950s. Max Walters and John Gilmour co-authored several books about British Wildflowers, including  Wildflowers: Botanising Britain in 1954s.  The Limestone Ecological Mound and a Fenland Display were part of the British Wild Plant section of the Eastern Garden. 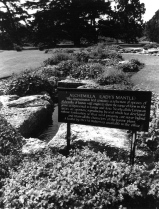 In the 1970s, Max Walters pioneered a Conservation Area in the Botanic Garden  as well as a planting of rare East Anglian Plants in beds near the Glasshouse Range.

Max Walters (right) in the 1980s with a ‘Conservation of Rare Plants’ display  highlighting the need to ‘Save These Flowers’. On the table are examples of rare plants, such as Ceropecia Dichroma, ‘A remarkable endemic succulent plant’ from the Canary Islands, Canary Bell-Flower Canarina Canariensis and Spring Gentian Gentiana Verna, ‘One of the famous Teesdale rarities. At the back is the delicate amethyst-coloured Pasque Flower Pulsatilla vulgaris, ‘the county flower of Cambridgeshire’, according to Plantlife. 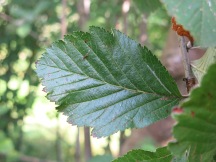 “Botanic Gardens are so important because there are some fabulous endangered trees growing here in Cambridge that probably people don’t realize.  For example, in the Garden there are endangered Sorbus trees which are facing extinction in the wild in the UK.   Then there is the Metasequoia which was only discovered in the 1940s and is endangered in the wild in China.”  Sara Oldfield, BGCI.

Tertiary Trees  An early conservation scheme instigated by John Gilmour in the Botanic Garden was the planting of Tertiary Trees between 1951 – 1973.  Tertiary trees are deciduous trees – such as the Manna Ash Fraxinus ornus, and the Hop Hornbeam (right) Ostrya carpinifolia (Betulaceae, Birch Family) – which were found across Britain during the Tertiary period (65.5 – 2.6 million years ago).

Botanical Beauties  (From left) Jade Vine Strongylodon macrobotrys, endangered in its native Philippines. The beautiful climber, Canarina canariensis, only grows in the Canary Islands and is an example of a specialised plant.  The majestic Dawn Redwood Metasequoia glyptostroboides was discovered in China in 1946 and is now classified as ‘critically endangered’.